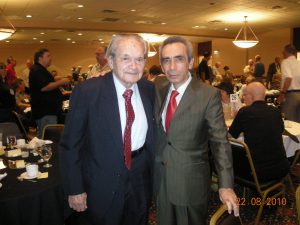 As a lover of music, Stan was attracted to the fine, new instrument which was no longer restricted a mere seven diatonic notes, but could play anything. It was not enough for Stan to play by ear, as many others did. He took full control of this little instrument, studying it fully. He learned musical notation, timing, harmony, composition and counterpoint. He studied for hours, daily, fascinated with the evolving potential of this new-found musical gem.

Stan’s first professional engagement came at the early age of 14. His technique advanced quickly to include rapid chromatic runs. In a relatively short time, therefore, his work and arrangements became the benchmark for the ensembles which included harmonica in their repertoire. He also did some solo work, duets, trios, and quartets. His versatility was soon recognized in the United States by radio, television, record companies, and theatres.

In the 1930’s, Stan Harper played in harmonica groups in Brooklyn along with some of the best harmonica players in the world. As classical music was Stan’s first love, they performed Beethoven’s Fifth, Scheherazade, and The Sorcerer’s Apprentice, among other popular pieces. In those days the harmonica group was king and for that reason, few solo performers emerged with any public acclaim.

Over the years, Stan Harper performed with Eddie Shu (Shulman), Carl Reiner, Howard Morris, Hal David, Werner Klemperer, Sam Wanamaker, and Leon Kirshner. In 1991, he presented a one-man show, demonstrating his skills using 5 to 6 different sized harmonicas, at the Smithsonian Institute of Arts, in Washington, D.C. The Hering Harmonica Company of Brazil worked with Stan to produce a 3.5 octave chromatic harmonica (14 holes) which surpassed the 3-octave instrument currently in use. This particular instrument has been greatly appreciated in both North and South America. The name Stan Harper is engraved on the instrument, an honor that only a few select harmonica musicians have achieved; namely, Larry Adler, Toots Thielmans, and Willi Burger!

During his career, Stan Harper lectured widely at Musical Association meetings and at specialized centres. He lived in Allenhurst, New Jersey, where he was a member of the Garden State Harmonica Club.

He was active to the end, at national conventions and enjoyed playing harmonica and writing arrangements. His participation at harmonica events was always a great pleasure for the organizing committees.

When I met Stan Harper – by Antonio Piana

The first time I attended the annual SPAH festival was in Milwaukee, Wisconsin, in 2007. As usually at SPAH conventions, the atmosphere was very friendly, with harmonica players playing everywhere. There are no competitions but open stage sessions, concerts and a lot of workshops and masterclasses. Stan Harper walked up and down the hallways, slightly hunched, wearing his Hawaiian shirt, looking at exhibition stands. Many people greeted him with friendliness and deference. I had attended his workshop and then I went to meet him. I introduced myself as an Italian amateur harmonica player, who loved both classical and jazz music. Stan told me that his wife was an Italian opera singer and we began to speak of music, harmonica technique and his musical career.

Since then, we have met at SPAH festivals every year and our friendship continued to build. He did not have Internet at home, so I kept in touch by telephone. One year, I met Stan in the SPAH shop where harmonica players sell their CDs and I noticed that he only had some old tape cassettes – among them was his recording of Novelettes, or Light Music. I said But your records will not be preserved for the future. What a pity, because there are no records of this type. You should transfer them to CD format, and save these musical masterpieces for posterity. He had the original master tape and all the rights so we agreed that we should get the tracks transferred to CD. We (EUCLED) now sell the CD, Stan Harper Plays The Novelettes.